One of the images donated to Metal by Eric Shenton. Here the Lion pulls a second- and a first-class coach at Rocket 150. The Lion was built in Leeds in 1838 by Messrs. Todd, Kitson and Laird (later called simply Kitsons) for use on the Liverpool and Manchester Railway. Together with its sister locomotive, the Tiger, it was one of two locomotives ordered by the Liverpool and Manchester to pull goods trains, and one of the first two to be built by Kitsons. Both used a 0-4-2 wheel arrangement with inside cylinders. In 1857, the Lion became a ballast engine, pulling only track-maintenance trains, and two years later it was sold to the Mersey Docks and Harbour Board, which used it as a stationary pumping engine. In March 1929, the Liverpool Engineering Board bought the Lion and restored it at Crewe, putting it back in working order: the preserved locomotive then took part in the 1930 centenary celebrations of the Liverpool and Manchester Railway, and in the 1938 centenary celebrations of the London and Birmingham Railway. Following the 1930 event, it was placed on a plinth at Lime Street station before being removed in 1941 for safety reasons. It had a starring role in the film The Titfield Thunderbolt (1952), which earned it some fame: it had previously featured in Victoria the Great (1937) and The Lady with the Lamp (1951). After being removed from Lime Street, the Lion was kept at Crewe until 1967, when the Liverpool Engineering Society loaned it to Liverpool Museum (now World Museum Liverpool): it became a permanent gift in 1970. Following its appearances at Rocket 150’s Grand Cavalcade, it was steamed at a number of railway heritage centres and museums until 1989 (making it at the time the oldest working locomotive in the world), when it was withdrawn in order to be conserved. In 1992, its condition was examined, showing that the Lion would need to be substantially modified in order to be steamed again, so the Trustees of National Museums Liverpool decided, in view of its historical significance, to preserve it as a museum piece only. It is exhibited in the Great Port gallery, which opened in the new Museum of Liverpool on 2nd December 2011. It should not be confused with a Type 4 diesel-electric locomotive of the same name, built in 1961 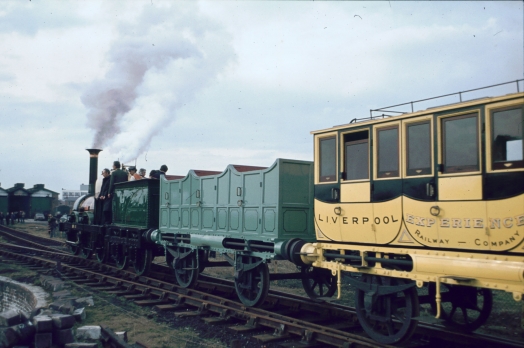